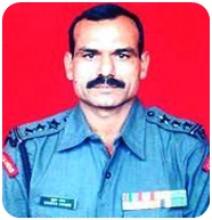 No. JC-568162M AC –I Suresh Chand Yadav was born on 01 June 1961 in village Khetan Khera of district Alwar, Rajasthan. He joined 51 SAG NSG on 30 December 2001. On 24 September 2002, two armed terrorists entered into the Akshardham Swamy Narayan Temple, Gandhinagar, Gujarat and started firing indiscriminately. The terrorists killed 30 people and injured over 10 people present in the complex. NSG was given responsibility to deal with the situation. AC-I Suresh Chand Yadav who was a part of the Task Force, was leading a group of Commandos to distract the terrorists and provide cover to other Commandos who were advancing to attack the terrorists. The terrorists were in thick shrubs and under cover of darkness. Meanwhile one commando of his team had got a gunshot, AC-I Suresh Chand Yadav without caring for his life and personal safety, moved forward under heavy volume of fire and evacuated the commando safely, after that he realized that his Team Cdr was also pinned down by accurate and heavy fire, AC-I Suresh Chand Yadav crawled forward to give cover fire to his Team Cdr so that he could extricate himself. After establishing contact with his Team Cdr, AC-I Suresh Chand Yadav lobbed grenades and fired at the terrorist. In doing so he came under direct fire of the terrorists, which enabled the rest of the team to close-in safely towards the terrorists in order to neutralize them. When he was less than five meters away from the terrorists, he received a burst of fire direct on to his face seriously wounding him. Despite bleeding profusely, he closed-in further and killed one terrorist in close quarter before succumbing to his injuries. AC-I Suresh Chand Yadav displayed raw courage, total dedication to the mission, leadership and tactical acumen of the highest order and sacrificed his life for the nation during the ”Operation Vajra Shakti” on 25 Sep 2002 . For this act of gallantry he was awarded ASHOK CHAKRA (Posthumous). He was survived by mother Smt Dodi Devi, father Sh. Gokul Ram adav, wife Smt Chandra and three children named Miss Sunita, Master Manoj Kumar and Master Sandeep Singh.