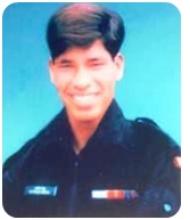 No. 4081190N R-II Surjan Singh was born on 03 July 1979 in village Ranou in District Chamoli of Uttarakhand. He joined 51 SAG NSG on 30 December 2001. On 24 September 2002 R-II Surjan Singh was a part of NSG Task Force to carry out intervention in Akshardham Swamy Narayan Temple, Gandhinagar, Gujarat. Approximately 1000 devotees were trapped inside the Temple. The Task Force located the terrorists outside the main Temple Complex. The terrorists were were positioned under cover and darkness, while NSG personals were not having any cover. The terrorists had to be pinned down to enable own troops to move forward and neutralize the terrorists. R-II Surjan Singh volunteered as scout and moved ahead of his Sqn Cdr, IC-52640Y Maj Tushar Joshi. He crawled ahead behind a low wall, with utter disregard to his own safety. He brought down accurate fire on the terrorists to assist No.3 Squad to move forward. Crawling close to the terrorists, he engaged them with fire. The terrorists retaliated with heavy fire on him. In this action the Sqn Cdr received splinter injuries on his face. R-II Surjan Singh immediately dived and covered Maj Joshi with his body. In the
process, he himself sustained splinter injuries. Despite his injuries, R-II Surjan Singh kept firing and lobbing grenades fixing the terrorists and refused to be evacuated. In order to assist the evacuation of Late AC-I Suresh Chand Yadav, he continued giving covering fire to No 3 Squad at the cost of his own safety. He then noticed the flash of a terrorist’s weapon. As he fired a burst from his carbine, the terrorist retaliated and R-II Surjan Singh received splinter injury on his head. Even as he fell, he refused to part with his weapon till he became unconscious. He displayed exceptional courage, with utter disregard to personal safety, professionalism, spirit-de-corps and devotion to duty of a very high order during “Operation Vajra Shakti” on 25 Sep 2002. For this act of gallantry he was awarded KIRTI CHAKRA (Posthumous). He is survived by father Sh Dhruv singh and mother Smt Sureshi Devi.