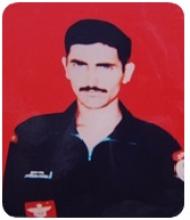 No. 13757107A R-II Subhash Chand Sharma was born on 25 June 1973 in village Karyalge of district Bilaspur Himanchal Pradesh. He Joined 52 SAG NSG on 31 December 1997. On 07 September 1999, a column of No 3 Sqn of 52 SAG (NSG) was tasked to lay cordon of a house in which the terrorists were hiding in village Targan, Tehsil, Banihal, District Doda (J&K). On 08 Sep 1999 at about 0100 hrs, the terrorist tried to break the cordon by firing at the cordon party in an attempt to escape under the cover of darkness. R-II Subhash Chand Sharma who was a part of the cordon party came under heavy volume of fire and sustained multiple bullet injuries. Without caring about his personal safety, he immediately retaliated the fire coming from terrorists and killed one of them. R-II Subhash Chand Sharma succumbed to his injuries and made the supreme sacrifice as a conspicuous act of bravery, unparalleled dedication to the mission during Ops Vijay (Ops Rakshak-III) on 08 Sep 1999. He was awarded Sena Medal (Posthumous) for his gallant action. He was survived by Father Sh Inder Ram and Mother Smt Vidya Devi.