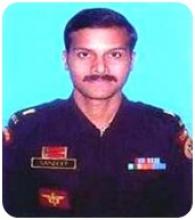 Born in Calicut, Kerala on 15 March 1977, IC-58660H Major Sandeep Unnikrishnan joined 51 SAG NSG on 20 January 2007. On 26 November 2008 during operation “Black Tornado”, 04 terrorists attacked Hotel TAJ Mumbai, killed 80 hostages and injured 240. Maj Sandeep Unnikrishnan led his team, to rescue hostages trapped there. At around 2030 hours, while clearing the rooms, Maj Sandeep Unnikrishnan heard cries of people, taken as hostages by terrorists. In spite of darkness and indiscriminate firing from terrorists, he demonstrated conspicuous courage in locating hostages. His Squad was taking position on both side of the doors, where hostages were located. Realizing entrapped terrorists had opened fire and lobbed grenade over NSG team. Due to this R-II Sunil got injured very badly. Maj Sandeep Unnikrishnan, without caring about his own safety retrieved R-II Sunil from the face of terrorist and also got bullet injury on his right arm. He was Injured but undeterred, he stormed inside all alone, to eliminate the terrorists and free hostages. During this violent engagement he inflicted several injuries to the terrorists, but also got fatally wounded and later martyred. Subsequently the terrorists were neutralized by his team, as they had been already cornered. His absolute act of bravery, unparalleled dedication to the mission and indomitable courage of highest order in the face of enemy, set a perfect example of extraordinary leadership. For this ultimate act of gallantry and self-sacrifice, he was awarded with ASHOK CHAKRA (Posthumous). He is survived by mother Smt Dhanalakshmi Unnikrishnan and father Shri K. Unnikrishnan.