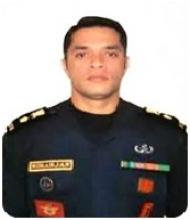 Born on 2nd May 1981, IC-66162L Lt Col Niranjan E. K. joined BD Unit of NSG on 24 May 2014. On the fateful day of 03rd Jan 2016 during operation “Dhangu Suraksha” at Air Base Pathankot (Punjab), about 0730 hours, the Bomb Disposal team of the Counter Terrorist Task Force, NSG was tasked to remove and recover live grenades, shells and dead bodies of terrorists as part of sanitization operation. The operational area was thickly vegetated and undulating with lot of unexploded grenades and explosive devices. Lieutenant Colonel Niranjan E K volunteered to lead his team for this high risk task of recovering the IEDs and dead bodies of the terrorists. He effectively removed two dead bodies of the terrorists and successfully neutralized the booby trapped IEDs attached to the bodies. Keeping in mind the safety of his team he did not care about his own, and led the recovery of the third body of the terrorist. While doing so, a concealed booby trap grenade blasted and he sustained severe multiple splinter injuries and later martyred. His gallant action ensured a safe passage for the intervening troops to conduct the successful operation and neutralization of two more terrorists. For this act of gallantry he was awarded SHAURYA CHAKRA (Posthumous). He is survived by mother Smt Radha Shivarajan, Wife Dr Radhika K. G. and daughter Vismaya.