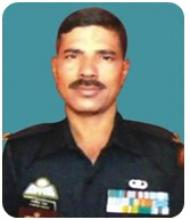 Born in a small village Ganesh Pur in Dehradun district of Uttarakhand on 1 July 1972, 4073611W R-I Gajender Singh joined the 51 SAG on 8 January 2008. On 27 November 2008 during OPS “Black Tornado” at about 1900 hours R-I Gajender Singh slithered down on top of Nariman House in Mumbai to counter terrorists who had killed 06 foreign hostages and were firing at civilians indiscriminately. Despite of effective fie of terrorist’s fire at close quarters, R-I Gajender Singh led his Squad for rescuing the hostages. He led his team with utmost courage and approached the room where terrorists were holed up with fire and move. At that point of time, a terrorist hurled a grenade at him in which he got injured grievously. Even then he was undeterred and crawled forward to make a forced entry into the room. Terrorists could not fire openly as R-I Gajender had taken position beside the door. Realizing that, terrorists could pose danger to life of his comrades, R-I Gajender Singh immediately charged inside, instantly killing one terrorist and injuring the other. On 28 November 2008, this gallant man succumbs to his injuries in the line of duty towards the nation. R-I Gajender Singh who displayed conspicuous bravery, indomitable spirit of the highest order and made supreme sacrifice for the nation, was awarded with ASHOK CHAKRA (Posthumous). He is survived by wife Smt Vineeta Devi and son Gaurav Bisht and daughter Kumari Preeti.