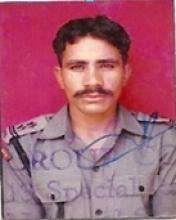 No 851570344, AC-II S S Shekhawat was born in village Gothra in district Jhunjhunu of Rajasthan. He joined 13 SRG NSG on 14 January 1986. On 03 Nov 1987, a Dett of NSG accompanied Late Shri Buta Singh, the then Home Minister of India in BSF Aircraft for Ranchi under Operation Black Panther. The party left Ranchi at about 0730 hours to cover two public meetings of HM at Belangi and Gumla (Distt Ranchi). After public meeting at Gumla both helicopters took off for Ranchi at 1645 hours. Due to poor visibility and inclement weather the helicopter carrying VIP returned back to Gumla. But the other helicopter continued to move towards Ranchi and did not return back. The helicopter which was carrying two NSG personnel and other 03 occupants had crashed near Ranchi and all the five occupants died in the fatal crash. AC-II S S Shekhawat laid down his life while in the line of ‘Operation Black Panther’ near Ranchi on 03 Nov 1987. He was survived by father Sh Amar singh, mother Smt Chandra Kanwar and wife Smt Suman Shekhawat.